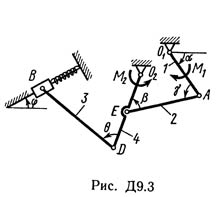 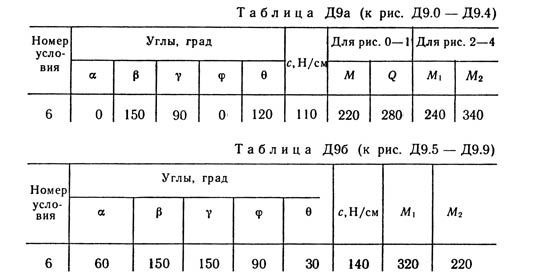 Uploaded: 13.01.2020
Content: d9-36.rar 27,94 kB
Loyalty discount! If the total amount of your purchases from the seller TerMaster more than:
If you want to know your discount rate, please provide your email:

TerMaster information about the seller and his items
onlineAsk a question

Solution of Problem D9 Option 36 - by the thermome of Targ S.M. 1989 year. Condition for the task Dynamics 9 (Full condition on page 86): The mechanism located in the horizontal plane is under the influence of the applied forces in equilibrium; the equilibrium position is determined by the angles a, B, γ, phi, tetta (Fig. D9.0 - D9.9, Tables D9a and D9b). The lengths of the mechanism rods (cranks) are equal: l1 = 0.4 m, l4 = 0.6 m (dimensions l2 and l3 are arbitrary); point E is in the middle of the corresponding rod. The spring force F acts on the slider B of the mechanism; numerically F = c * l, where c is the spring stiffness coefficient, l is its deformation. In addition, in fig. 0 and 1, the force Q acts on the slider D, and the pair of forces with the moment M acts on the crank O1A; in fig. 2–9, pairs of forces with moments M1 and M2 act on the O1A and O2D cranks. Determine what the equilibrium deformation l of the spring is equal to, and indicate whether the spring is stretched or compressed. The values ​​of all given values ​​are given in table. D9a for fig. 0-4 and tab. D9b for fig. 5–9, where Q is expressed in Newtons, and M, M1, M2 in Newtonometers. The construction of the drawing begins with a rod, the direction of which is determined by the angle α; for greater clarity, depict the slider with guides and the spring as in example D9 (see Fig. D9, as well as Fig. D9.10, b). If in the drawing of the solution to the problem being solved, the rod attached to the slider B will be aligned with the spring (as in Fig. D9.10, a), then the spring should be considered attached to the slider on the other side (as in Fig. D9.10, b, where at the same time otherwise guides are shown).

After payment, just download the solution to the problem D9 Option 36 (Figure 3 condition 6) on theoretical mechanics from the Targ SM 1989 for correspondence students of engineering, construction, transport, instrument-making specialties of higher educational institutions. The task is framed in word format, added to the zip archive.

I would be very grateful if, after successful completion of the work, you leave positive feedback. Believe me, this is very important for me.
Thanks in advance.