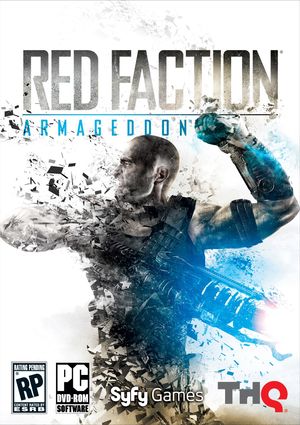 Uploaded: 20.10.2011
Content: rfa-12.jpg 47,28 kB
Loyalty discount! If the total amount of your purchases from the seller game.it-svit more than:
If you want to know your discount rate, please provide your email:

game.it-svit information about the seller and his items
offlineAsk a question

You SCAN acquires a license key activation of the box with the game RED FACTION: ARMAGEDDON from the official distributor - the company "Buka" to activate the system STEAM.

The item you will receive after payment, in the browser and copy to Your E-mail.

The plot of "Red Faction: Armageddon" takes place on Mars over fifty years after the events of "Red Faction: Guerrilla", the third game of the series. Terraformer to regulate the climate of the planet, keeping the atmosphere was destroyed, leading to the destabilization of the climate to such an extent that made it impossible for people staying on the surface of the planet. Colonists have created an extensive network of underground structures, where and moved to the surface of the planet.


The protagonist of the game is Darius Mason, grandson of Alec Mason and Samani. Darius is in Bastion, underground heart of colonists. It is engaged in any life-threatening work, including raids on disfigured and destroyed the planet´s surface. Randomly, he opens a mine in an old Marauder temple, which leads to the awakening of long-dormant evil forces. Over the Martian colonists in mortal danger, and Darius, together with the Red Brigade will destroy it.

1. You need to download and install Steam http://steampowered.com/download/SteamInstall.msi (if not already installed)

3. Go to the "My Games" and select "Activate via Steam ...", read and agree to the Steam Subscriber Agreement and enter the key received immediately after the payment.

4. After activating the game appear in the list of games and you can download it from steam. The installation process (download) takes about 15-50 minutes (depending on your internet channel).

• This is the official version from the company Buka - it has territorial restrictions (suitable only for Russia and CIS countries)!

• After activation serial key in the steam, the key becomes not valid

ie re-use it is no longer possible, so be sure to remember all the details of your account! Without them, you will not be able to gain access to active games in the future.


The original copy of the key, the license agreement and all copies of the software in its original packaging, you can get a convenient way for you. To do this, after payment and receiving a digital copy of the key, please contact us by email or phone. Postage and packing, as well as courier services are paid separately by you.

After purchasing, please pay us a grain of your time and leave your review.